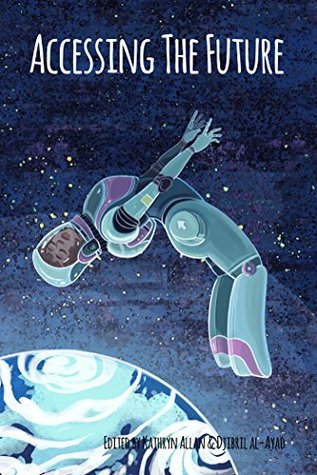 The fifteen authors and nine artists in this volume bring us beautiful, speculative stories of disability and mental illness in the future. Teeming with space pirates, battle robots, interstellar travel and genetically engineered creatures, every story and image is a quality, crafted work of science fiction in its own right, as thrilling and fascinating as it is worthy and important. These are stories about people with disabilities in all of their complexity and diversity, that scream with passion and intensity. These are stories that refuse to go gently.

So this is the third book I’ve read so far for Sci-Fi month over on Twitter but I’ve decided to review it first just because it’s so fantastic. I bought this a while ago on Amazon when I had some money left on a gift card then forgot about it for a while until this month. I’ve been trying to focus on reducing my physical TBR pile for Sci-Fi month (especially as then I can take a photo at the end of them all in a nice stack) but I just had to make an exception for this as it sounded fantastic.

Before we even get to the stories, there is a fantastic introduction which discusses the fact that not only does this attempt to represent a diverse range of disabilities, but it wants to ensure the people portrayed are equally as diverse, acknowledging that a lot of disability awareness focuses on straight white people. I was very impressed with that and glad to know they were making a conscious effort to be as inclusive as possible.

The range of disabilities represented is very interesting ranging from physical to mental, including even discussing how many disabilities are due to culture and so one story is focused on imagining what a future would be like where grief is considered a disability. I won’t say too much about the stories themselves but there is a fantastic range and I really enjoyed them all. It’s hard to pick a favourite since all the characters are brilliant and well portrayed.

Along with short stories, there are also several pieces of artwork. Each piece of artwork is followed by a description of the image for those who are unable to see it, which I was particularly pleased to see in a collection focused on disabilities. Unfortunately, there is not an audiobook version yet but I hope there will be one eventually to make it even more accessible. Even though my sight is fine, there were details mentioned in the descriptions that I hadn’t noticed which helped enrich my enjoyment of the art. My favourite piece of artwork though is definitely the cover, which was one of the reasons I bought the book in the first place.

I highly, highly recommend this collection. It’s incredibly diverse and full of great sci-fi. I’ve already got several friends to buy it just because I’ve been gushing about it so much and if it was possible to gift Kindle books in the UK, I’d definitely have bought it for several more.

3 thoughts on “Book Review – Accessing the Future: A Disability-Themed Anthology of Speculative Fiction”