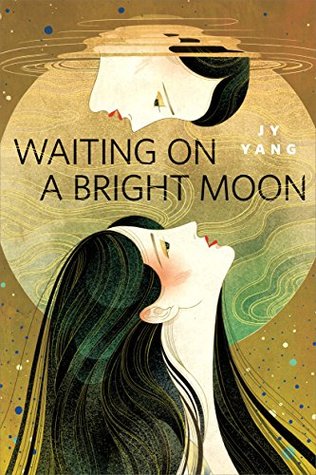 Xin is an ansible, using her song magic to connect the originworld of the Imperial Authority and its far-flung colonies— a role that is forced upon magically-gifted women “of a certain closeness”. When a dead body comes through her portal at a time of growing rebellion, Xin is drawn deep into a station-wide conspiracy along with Ouyang Suqing, one of the station’s mysterious, high-ranking starmages

Before I start reviewing this, I first need to say that this is a short story from tor.com which means that you can read it for free right here.

It’s SciFi month over on Twitter and what better way to get involved that reading some fantastic short fiction. I had some time to spare and so chose this randomly because the cover and the name really appealed to me.

This short story focuses on Xin who is an ansible that can create portals between herself and her partner Ren. However, as mentioned in the blurb, when a dead body comes through there is an investigation and Xin finds herself being drawn into the politics of the station. As it’s a short story, I obviously cannot say too much in regards to plot without spoiling it, but I thoroughly enjoyed the story here.

As it’s a short story, we don’t have much space for worldbuilding but the author has managed to do this incredibly well. Their language use is brilliant and they paint a wonderful picture of the world that Xin lives in and the issues facing their colony. One particular use of language that I adore is that the song that Xin sings to create portals with Ren is in Chinese. You don’t need to be able to read Chinese to appreciate the novel, but from the comments on the story it seems that if you, it’s even more enjoyable. I’ve actually just started learning Chinese and so I’ve made it a goal to eventually be able to re-read this and understand the songs. It also really helps reinforce the fact that the characters in this story are clearly not white, although that should have been obvious just through the names.

Xin is our main character and I absolutely adore her. I would happily read many more stories focused on her, such as stories focusing on her time training to be an ansible or focusing on what happens next after this short story. I don’t know if the author has plans to write any more in this world, but I really hope they do because I would love to see more of Xin. One of the other main characters in this is Officer Ouyang Suqing who is a Starmage. She’s brilliant and the relationship between her and Xin is a treat to watch develop. Through them, we learn more about the powers of starmages and ansibles and about the growing rebellion. Xin and Suqing are also both not straight and one of my favourite scenes is where Xin is watching Suqing attempt to flirt with a man to distract him. It was hilarious

I absolutely adored this short story and I would highly encourage everybody to read it because it’s just an absolute delight. Indeed, as soon as I finished reading this I went and bought both of the authors novellas on Amazon as I adored their writing so much. I can’t wait to see what they write next, as they’re now added to my “Must-read” list.