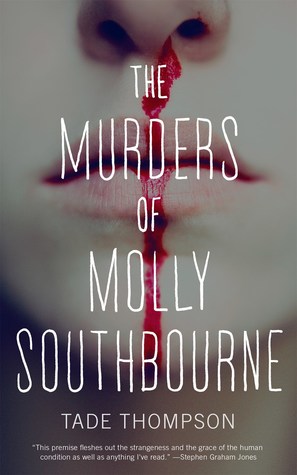 The rule is simple: don’t bleed.

For as long as Molly Southbourne can remember, she’s been watching herself die. Whenever she bleeds, another molly is born, identical to her in every way and intent on her destruction.

Molly knows every way to kill herself, but she also knows that as long as she survives she’ll be hunted. No matter how well she follows the rules, eventually the mollys will find her. Can Molly find a way to stop the tide of blood, or will she meet her end at the hand of a girl who looks just like her?

I picked this up thanks to this Tor article about the NOMMA award. It won the Novella category, beating Binti: Home which I adored so figured I had to give this a try as the premise sounded fascinating.

The plot of the Novella follows the life of Molly as she grows up dealing with a very strange issue – her blood causes identical versions of her to form which then attempt to kill her. We see her as a child and follow her as she grows up and learns more about how to behave and deal with the Mollys – even if she doesn’t always follow that advice!

As Molly is a girl, this naturally makes it much harder to avoid bleeding and the fact that this is tackled in the Novella is something I really enjoyed given how it’s often overlooked. Her teenage years were really interesting to read about and I was constantly hooked right up until the end and left wanting to know even more.

Throughout the Novella we get a few glimpses of the worldbuilding which is very intriguing and something I’d definitely like to see more of in the sequel which is due to come out in 2019. I’m super excited to return to the world as it was a fantastic read and very creative premise.

It’s way past Halloween now, but I’d definitely recommend this to anybody looking for a short, spooky read. It’s also very well written and I would recommend it to anybody who enjoys darker Fantasy stories. 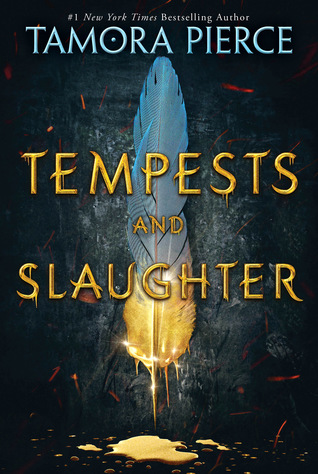 Arram. Varice. Ozorne. In the first book in the Numair Chronicles, three student mages are bound by fate . . . fated for trouble.

Arram Draper is a boy on the path to becoming one of the realm’s most powerful mages. The youngest student in his class at the Imperial University of Carthak, he has a Gift with unlimited potential for greatness–and for attracting danger. At his side are his two best friends: Varice, a clever girl with an often-overlooked talent, and Ozorne, the “leftover prince” with secret ambitions. Together, these three friends forge a bond that will one day shape kingdoms. And as Ozorne gets closer to the throne and Varice gets closer to Arram’s heart, Arram begins to realize that one day soon he will have to decide where his loyalties truly lie.

I was beyond excited to receive this as an ARC because growing up, I absolutely adored Tamora Pierce’s books and the Immortals quartet was my introduction to Tortall. If you haven’t read any of her books before, you can still read this as it’s the backstory to one of the characters in the Wild Magic trilogy who isn’t from Tortall.

I both loved and was upset about the different setting – it was great seeing more of the world but I did miss Tortall and all the characters I loved. It was interesting getting to see Arram as a child and Ozorne and I loved a lot of the side characters. We also get to start learning a bit about the Immortals.

Unfortunately, not much really happens in this book. It’s literally just Arram going to school and his day to day life. Now, that can be interesting but at times it was just a bit too mundane. One aspect I did like was that it focused a lot on the fact he was a young teenage boy and all the issues that he faced as part of growing up – I think that will really help young boys that read the books, as it’s something I’ve not seen much in YA fiction.

I’ll definitely still read the next one because it seems like this book was mostly just laying the groundwork for the next book as there are a lot of things that need resolved. In the end, I came away rather disappointed by this as I was hoping for much more.

As much as I love Tamora Pierce, I would only recommend this to fans of the Immortal Quartet. If you’ve never read her books, I would highly recommend starting with any other series because this one is definitely not her best work.