THIS IS THE WAY THE WORLD ENDS. AGAIN.

Essun, masquerading as an ordinary schoolteacher in a quiet small town, comes home to find that her husband has brutally murdered their son and kidnapped their daughter. Mighty Sanze, the empire whose innovations have been civilization’s bedrock for a thousand years, collapses as its greatest city is destroyed by a madman’s vengeance. And worst of all, across the heartland of the world’s sole continent, a great red rift has been been torn which spews ash enough to darken the sky for years. Or centuries.

But this is the Stillness, a land long familiar with struggle, and where orogenes — those who wield the power of the earth as a weapon — are feared far more than the long cold night. Essun has remembered herself, and she will have her daughter back.

She does not care if the world falls apart around her. Essun will break it herself, if she must, to save her daughter.

Firstly, I can’t believe how long it took me to finally get around to reading this series! It’s been on my TBR list for ages and I decided back in April last year that it was going to be my Bingo pick for the “Dying Earth” square and I just kept getting distracted. I’m so glad I finally read it though as it’s incredible.

The worldbuilding is fantastic, we get small snippets of information at the end of each chapter that I always love as they give us small glimpses of the world and its history. The first book is told through three POVs and rotates between them. There is Essun, the mother who is desperate to save her daughter, Syenite the Orogene who is to learn from a new mentor and Damaya a student studying at the Fulcrum which is where Orogenes are trained. Through each of their POVs you are able to get a glimpse at the world that the novel is set in. The three POVs also take place at different moments in history with Essun’s story being in the present day while the other two give you background information as to how the world ended up in this state.

The magic system, that of orogenes, is something that I really enjoy. I love interesting magic systems and although we don’t really find out too much about how it actually works it’s still fascinating and the parts that involve the use of orogeny are of particular interest to me.

Characterwise, the fact that Essun is a mother is something I really enjoyed. It’s rare to have a mother as the main character in a Fantasy novel and so that was a nice refreshing change. All of the characters are really well developed and their relationships with each other are brilliant. Several of the characters are also queer and have romances throughout the trilogy (I’m saying trilogy here as I can’t remember when some of them start, but there’s definitely at least one in the first book)

Overall, I thoroughly enjoyed this book and indeed I absolutely devoured the next two to complete the trilogy as I just couldn’t put it down. I would highly recommend this to any Fantasy fan, and to those doing Bingo it’s a perfect choice for the “Dying Earth” square. It’s also a great pick for anybody trying to read books by Black Authors for Black History Month and just an amazing book in general. 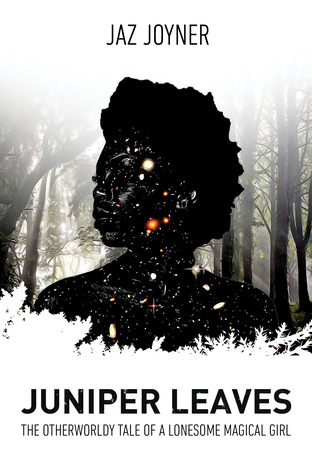 Kinky-haired blerd Juniper Bray used to believe in magic, until she lost her best friend: her grandmother. Now this 15-year-old shy girl is going on her dad’s research trip to a farm hundreds of miles away to stay with a family she barely knows and the opposite of a best friend, her new arch nemesis, Bree McKinney. Little does she know the next few months Juniper will discover magical powers she never knew she had, stumble into her first crush and well, quite frankly, save the world.

Juniper Leaves is a fantastical coming-of-age tale of a girl who learns to let go, live a little, and best of all, believe in herself — all by her sixteenth birthday.

So, I saw this recommended a few weeks ago on Twitter and just loved the name. I then saw the cover and adored it and since I was looking for a new Kindle Unlimited book it seemed perfect!

Juniper is an adorable “blerd” (black nerd) who is dealing with the recent loss of her grandmother. Her and her cousin, Breen, discover that they have magic powers and need to protect the Earth from enemies from a different plane of reality. The plot itself isn’t that complicated, it’s a rather standard “chosen one gets powers and saves the world” but well, something doesn’t have to be complicated to be good. I enjoyed the worldbuilding and the magic system, although not super fleshed out, was fun. It’s nice to have a light, fun story every now and then and this was definitely that.

What I was not such a big fan of though were the characters. That’s a lie, they’re actually all great but at the start, Juniper and Bree do not get on for what seems really ridiculous reasons. Juniper thinks Bree is awful and is incredibly rude to her and it just…doesn’t make sense. Thankfully once we get past this to where they start bonding, it’s much better. I think the fact that it’s in the first person didn’t help this part because we see Juniper’s thoughts and instead of helping us understand her reasoning, it just made me more annoyed at how she was treating Bree just because they’re not very similar.

As is obvious by the fact that Juniper is described as a “blerd”, the main character in this is Black. Not only that, but most of the other characters are her family and so are all also black. There’s also a f/f relationship that occurs later on in the book and so if you’re looking for something nice and diverse, this is definitely something to add to your TBR!

If you’re looking to read more books by black authors for Black History Month then I’d definitely recommend this as a nice light read. It’s good for those that enjoy Fantasy set in our world and I saw it recommended for those who enjoy “magical girl” stories.

Forget about cheap furniture, meatballs and crime fiction. Sweden has so much more to offer. Waiting for the Machines to Fall Asleep contains twenty-six stories from the new generation of Swedish writers of science fiction and the fantastic. Stories ranging from space horror and post-apocalyptic nightmares to tender dramas. Stories with steampunk horses, android uprisings and cheeky goblins. Stories that are action-packed, wise, silly, beautiful, surreal and horrifying.

So, for those that don’t follow me on Twitter, I recently got back from a holiday to Denmark with a short day-trip to Sweden and so naturally it seemed like the perfect time to try and find some Danish and Swedish SFF to read. Thanks to the fantastic SF in Translation website, I was able to find this gem and it was only 99p on Kindle so I just had to get it. Plus it means I can now cross off Sweden on my Read Around the World challenge! Hurrah!

Given that there are 26 stories in this anthology, it’s to be expected that some would be much better than others but I was pleasantly surprised by the consistently strong quality of all the stories. Indeed, although I liked some more than others they were all fantastic. The range of stories included was also fantastic from one focusing on AI (which lends its name to the title of the collection) to another focusing on interpreting wisdom from an ancient music player (Jump to the Left, Jump to the Right). They were all fantastic and as with any collection, it’s hard to talk about them all without writing thousands of words.

If you have an e-reader and like SFF then I strongly recommend this collection. It’s incredibly cheap (I mean seriously you’re paying less than 4p per story) and is definitely worth it.